Thanks to Jenny Somerville for the photos
GIGS ARCHIVE

Solo gig in An Caladh, Balivanich, Benebecula, on Saturday 23rd April went well. Good to see some old friends from Aberdeen and Sutherland as well as a good turn out of locals, including the inimitable Norman Maclean (see pic below).

Alex will be performing some of the songs from his album "Like the River", with some new material, at a concert in Bon Accord Church, Rosemount Viaduct, Aberdeen AB25 1NS, on Saturday 19th March at 7.30pm. He will be backed by his sons, Doug and Rob, and the support band is JG Hymns, headed by Jon Green who hails from America. Jon works the rich vein of classic hymns plus his own original material.

The gig is a fundraiser for an Eastern Europe for Christ camp in Hungary - a suggested donation of £10 (£5 concession) on the door - all profits will go to EEFC. Both Jon's and Alex's CDs will also be on sale on the night.

Alex and the boys are supporting JG Hymns (Jon Green and friends) at a gig in the Eric Liddell Centre, Holy Corner, Edinburgh EH10 4DP on Friday 11 February at 8pm. Hope to see you there.

Alex is playing a solo gig in Alness, Ross-shire on Thursday 21st October at 7pm. This is part of Rosskeen Free Church's regular Thursday night musical meetings and is in the MacCallum Centre, Perrins Road, Alness (check google maps) opposite the Church of Scotland. It's a while since Alex played solo - he's so used now to playing with Doug and Rob - but he'll try his best to get a big sound! Alex says it will be good to see his friends in the North at the gig!

We're playing a fundraiser in Buccleuch, West Crosscauseway (EH8 9JP) on Friday 27 August at 7.30pm. The support act is J G Hymns led by Jon Green. It's in support of various Scottish and international outreach mission projects and there's a suggested donation of £10 on the door. It's a combination of Scottish folk rock and American spiritual song.

Golspie was our first performance of our new song - The Thin Red Line - about the original Thin Red Line, the 93rd Sutherland Highlanders at the Battle of Balaklava in the Crimea. The Americans stole the title for a book and film about the American army. We're stealing it back.

I was reading about the 93rd in connection with another project, and what struck me was the tragic irony of the year 1814. While the 93rd were giving their lives in the ridiculously conceived Battle of New Orleans, their people were being evicted from their crofts in Stathnaver. And nobody seemed to see the contradiction...

Great gig in Golspie! Weird being back in my old High School - even a couple of my old teachers there - they must have been really young back then... Funny thing was the old place looked just the same! Great mix of people there. Saw some cousins I hadn't seen for ages. Gig went well in spite of the fact I had a terrible cough right up to that day. Voice kept clear all night! Boys played well. Thanks to Vicky and Susie and Liz for helping out, and to Kenny and Reta for organising it. Raised £355.50 for Help for Heroes.

Next gig is on 26 June in Golspie, Sutherland - 7.30pm in the Assembly Hall, Golspie High School. Thanks to Kenny MacDonald for setting this up!

Alex is returning to his old stamping ground, as he is a native of the Strath of Kildonan and a former pupil of Golspie High School.

Alex will be backed as usual by his sons, Doug and Rob - Doug on bass and bandurria, and Rob on drums and percussion, giving the songs their distinctive Scottish folk/rock sound.

Entry is £5 on the door (children free) and includes complimentary soft drinks. All profits and donations will go to the national charity Help for Heroes who provide practical support for the wounded in the Armed Forces.

Great night. Packed out. In spite of initial trouble in setting up gear and PA and soundchecking (in 45 minutes(!) and no sound from monitors, it was a great success. We did Big Man, All the Night, Shepherd's Song and Tam Moncrieff. Big thanks to Jon Green for playing keyboard. The John Hardy Band did a wide selection of bluegrass and country songs. £1,600 was raised overall for the children's ward of the Nazareth Hospital.

Good news for the Nazareth Hopital, but bad news if you wanted a ticket - the gig has been sold out for some time. We need to book a bigger gig next time! We hope to play with the John Hardy Band again.

This is in aid of the children's ward of the Nazareth Hospital.

They are supported by Alex MacDonald & Band who play their own style of Scottish folk/rock.

Entry by ticket only

The next gig is scheduled for Friday 26th March 2010 in the Eric Liddell Centre, Holy Corner, Edinburgh EH10 4DP. Alex and the boys will be the support act in this fundraiser for the EMMS hospital in Nazareth. Donald Forsyth does work for this charity and his band will be headlining. More details to follow - keep checking back.

Alex says, "It's going to be difficult arranging band practices now that Rob is in Aberdeen, but we're really looking forward to the gig. It should be a good night!"

The Smithton gig went very well with around 120 people there and over £400 raised from CD sales alone for the work of Marsali Campbell with Dwelling Places in Uganda. This together with entry money and donations will go in particular to an appeal Marsali has made for the medical treatment of a little girl called Sylvia. Dwelling Places works with street children in Kampala.

Again Alex and the boys enjoyed the gig and feel they are getting tighter - if only the old man would remember all the words of his interminably long songs! There was even a call for an encore!

Over 100 people came to the gig in Buccleuch on Saturday 4 October and over £1000 was raised for the Kirkcaldy Free Church community outreach building project.

Alex, Doug and Rob were pleased with the encouraging support and want to thank all those who bought tickets, made donations and bought CDs.

It was the first full live performance of the songs on Like the River, and Alex and the boys were happy with how things went, and the audience was appreciative!

Neil MacMillan, whose father Douglas is the subject of one of Alex's songs, spoke after the half-time break about the building project in Kirkcaldy. The Kirkcaldy church is situated in Sinclairtown, one of the poorest communities in Scotland. Parts of the area are in the worst 1% in Scotland for crime and educational attainment. The vision is to see the church building used every day to help meet the needs of those who live around it. Already the church building provides facilities for Fife Council, Health Visitors, addiction services and others who work in the community.

For more details of the Kirkcaldy project, go here. 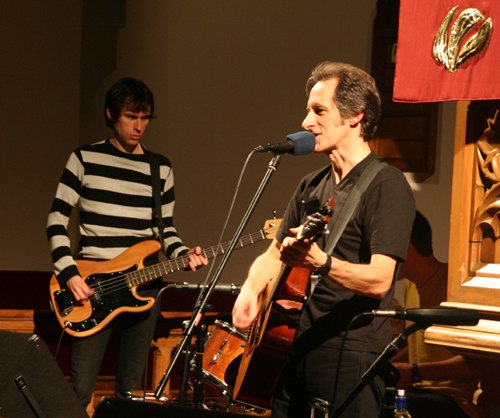 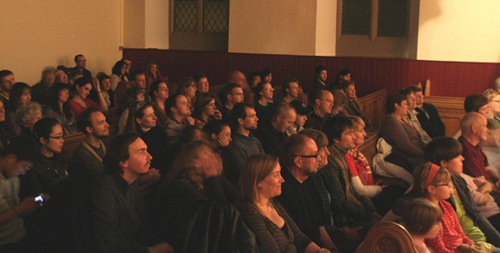 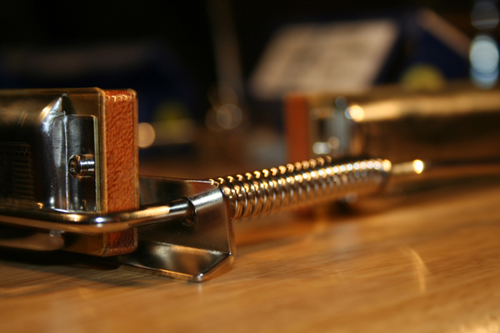